The Black Box challenge has just ended. We were thoroughly thrilled to learn that the winner, doubleshot, used sparse filtering, apparently following our cue. His score in terms of accuracy is 0.702, ours 0.645, and the best benchmark 0.525.

We ranked 15th out of 217, a few places ahead of the Toronto team consisting of Charlie Tang and Nitish Srivastava. To their credit, Charlie has won the two remaining Challenges in Representation Learning.

The difference to our previous, beating-the-benchmark attempt is twofold:

Somewhat suprisingly, one layer works better than two. Even more surprisingly, with enough units you can get 0.634 using a linear model (Vowpal Wabbit, of course, One-Against-All). In our understanding, that’s the point of overcomplete representations*, which Stanford people seem to care much about.

Recall The secret of the big guys and the paper cited: An Analysis of Single-Layer Networks in Unsupervised Feature Learning, key words here being “single layer”.

Sparse filtering is better than K-means mapping with high-dimensional datasets, because the latter is subject to a curse of dimensionality and works with hundreds of features, tops.

How we did it

Then we run Vowpal Wabbit in a “neural network” mode with 20 hidden units:

If we wanted to run just a linear model, the training command would be:

Some code is available at Github.

We thought that the more iterations for sparse filtering, the better. So we left the thing running overnight to complete 450 iterations instead of 100 we tried before. And indeed, the value of the objective function went down nicely: 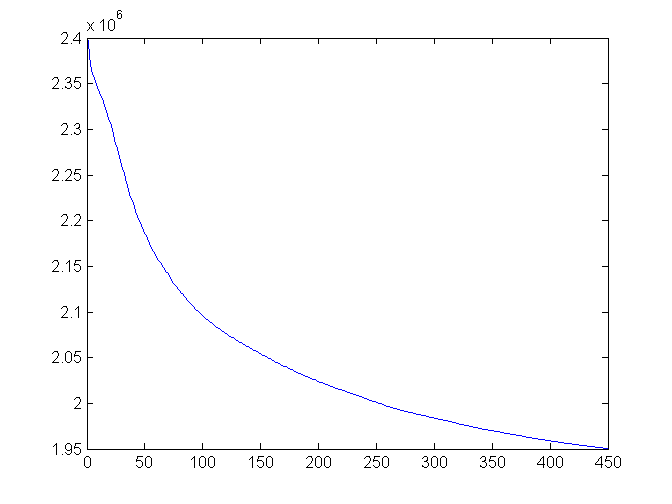 However in supervised stage it turned out that the representation learned with 100 iterations worked significantly better. This is a little disconcerting to us.

Our previous article on deep learning made some splash, as can be seen on this Google Analytics screenshot:

The spike is on May 3, shortly after publishing the post.