As usual, there’s an interesting competition at Kaggle: The Black Box. It’s connected to ICML 2013 Workshop on Challenges in Representation Learning, held by the deep learning guys from Montreal.

There are a couple benchmarks for this competition and the best one is unusually hard to beat1 - only less than a fourth of those taking part managed to do so. We’re among them. Here’s how.

The key ingredient in our success is a recently developed secret Stanford technology for deep unsupervised learning: sparse filtering by Jiquan Ngiam et al. Actually, it’s not secret. It’s available at Github, and has one or two very appealling properties. Let us explain.

The main idea of deep unsupervised learning, as we understand it, is feature extraction. One of the most common applications is in multimedia. The reason for that is that multimedia tasks, for example object recognition, are easy for humans, but difficult for computers2.

Geoff Hinton from Toronto talks about two ends of spectrum in machine learning: one is statistics and getting rid of noise, the other one - AI, or the things that humans are good at but computers are not. Deep learning proponents say that deep, that is, layered, architectures, are the way to solve AI kind of problems.

The idea might have something to do with an inspiration from how the brain works. Each layer is supposed to extract higher-level features, and these features are supposed to be more useful for the task at hand. 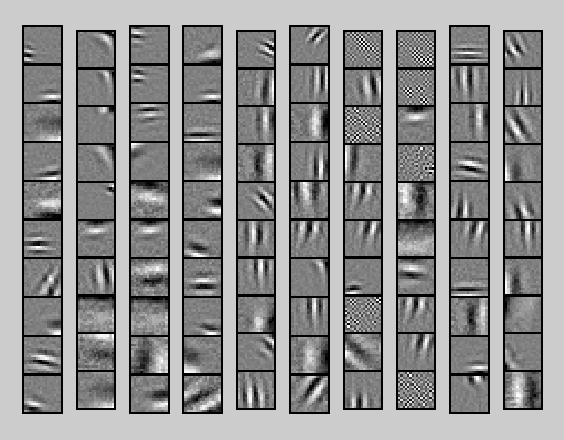 For example, single pixels in an image are more useful when grouped into shapes. So one layer might learn to recognize simple shapes from pixels. Another layer could learn combining these shapes for more sophisticated features. You’ve probably heard about Google’s network which learned to recognize cats, among other things. 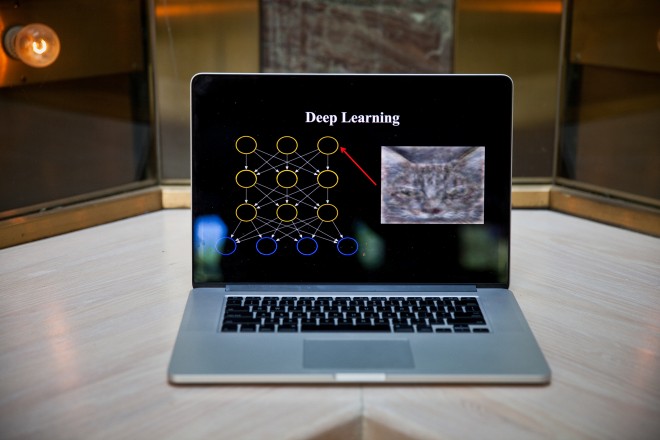 The downside of multi-layer neural networks is that they’re quite complicated. Specifically, the setup is not the easiest thing, there’re among slower methods as far as we know, and there are many parameters to tune.

Sparse filtering attempts to overcome these difficulties. The difference is, it does not explicitly attempt to construct a model of the data distribution. Instead, it optimizes a simple cost function - the sparsity of L2-normalized features. It’s simple, rather fast and it seems to work.

The hyperparams to choose are:

Then you run the optimizer, and it finds the weights. You do a feed-forward step using those weights and you get a new layer, possibly an output layer. Then you feed the output to the classifier and that’s it.

The train set for The Black Box competition is notably small (1000 examples), as the challenge is structured around unsupervised learning: there’s 140k unlabelled examples. The point is to use them so that they help achieve better classification score.

Then we trained a random forest on resulting features. Our code is available at Github.

100/100 using extra data with 300 trees in the forest will get you a score around 0.52, enough to beat the best benchmark. Without extra data you’ll get 0.48, which is still pretty good and much faster.

To us, there seem to be three deep learning centers in academia: Stanford, Toronto, and Montreal. Two of them are in Canada and they are competing a little bit. Toronto group, lead by Geoff Hinton, seems to be in the lead. Geoff Hinton recently went to work for Google officially, just like Andrew Ng from Stanford. (Is that a measure of success?) Montreal group is lead by Yoshua Bengio, and they organize the said workshop at ICML 2013.

Toronto has come up with dropout, one of the most important improvements for neural networks in recent years, at least for the back-propagation type. Dropout is meant to reduce overfitting by randomly omitting half of the feature detectors on each training case. In response, Montreal released its invention: maxout, a natural companion to dropout designed to both facilitate optimization by dropout and improve the accuracy of dropout’s fast approximate model averaging technique.