Here’s a hint. Think about the following:

That’s right. There’s no Zygmunt the Polish economist ever willing to relocate to San Francisco.

And the “we” that we always use in the posts is not majestic plural. We are three Chinese PhD students: Ah, Hai, and Wang*.

To keep the style consistent, Ah does most of the writing and all of the editing. He likes to stay on top of state of the art, runs @fastml_extra and can be a bit shy sometimes. Ah has a (no-longer) secret crush on Anima Anandkumar.

Hai doesn’t care about state of the art or any fancy methods. He just wants to get stuff done. He also doesn’t mind things like data wrangling, feature engineering, and plotting. Hai likes to help people, writes most of the code and is the principal author of phraug.

Wang has a confrontative style and strong opinions about everything. He hates big data, Hadoop, Spark, Weka, Java, Facebook, Google, TensorFlow, AI, distributed systems, you name it. One entity Wang tolerates is Kaggle.

Unfortunately, he has the strongest command of spoken English and almost no accent, so if you are one of the few who have spoken to Zygmunt over Skype, sorry - it was Wang.

In case you exchanged any written messages with Zygmunt, it might have been any one of us typing. We usually route our traffic through Poland to keep up appearances.

Why the deception? China, aspiring to the role of global superpower, tends to evoke strong feelings. At the same time, many people in the west unfortunately disregard Chinese scientists and their work. Therefore we adopted a neutral guise so as not to distract readers from the content.

To preserve the cover, we tried to abstain from mentioning Chinese creations. We think we mostly succeeded - we have only written about Extreme Learning Machines, Liblinear, and stuff by DMLC guys: XGBoost and MXNet.

Keeping our mouths shut that way was hard, because Chinese have a lot to offer, both in traditional machine learning and in deep learning - even when counting only those in continental China. There’s been some very advanced research going on, for example on topic models and dimensionality reduction [1] [2] [3] [4] [5]. Ignore it at your own peril. 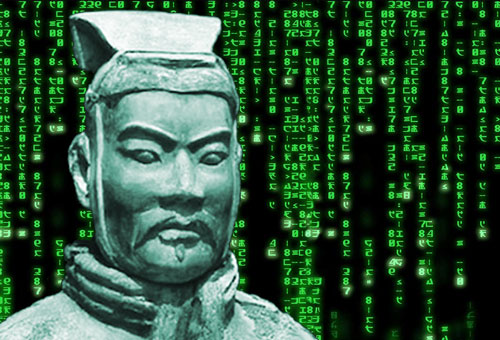 Let your plans be dark and impenetrable as night, and when you move, fall like a thunderbolt.
–Sun Tzu, The Art of War