Calibration is applicable in case a classifier outputs probabilities. Apparently some classifiers have their typical quirks - for example, they say boosted trees and SVM tend to predict probabilities conservatively, meaning closer to mid-range than to extremes. If your metric cares about exact probabilities, like logarithmic loss does, you can calibrate the classifier, that is post-process the predictions to get better estimates.

This article was inspired by Andrew Tulloch’s post on Speeding up isotonic regression in scikit-learn by 5,000x.

Before you attempt calibration, see how good it is to start with. The paper we’re going to refer to is Predicting good probabilities with supervised learning [PDF] by Caruana et al.

On real problems where the true conditional probabilities are not known, model calibration can be visualized with reliability diagrams (DeGroot & Fienberg, 1982). First, the prediction space is discretized into ten bins. Cases with predicted value between 0 and 0.1 fall in the first bin, between 0.1 and 0.2 in the second bin, etc.

For each bin, the mean predicted value is plotted against the true fraction of positive cases. If the model is well calibrated the points will fall near the diagonal line.

Here’s a reliability diagram of almost perfectly-calibrated classifier. It’s Vowpal Wabbit with data from the Criteo competition, if you’re curious. 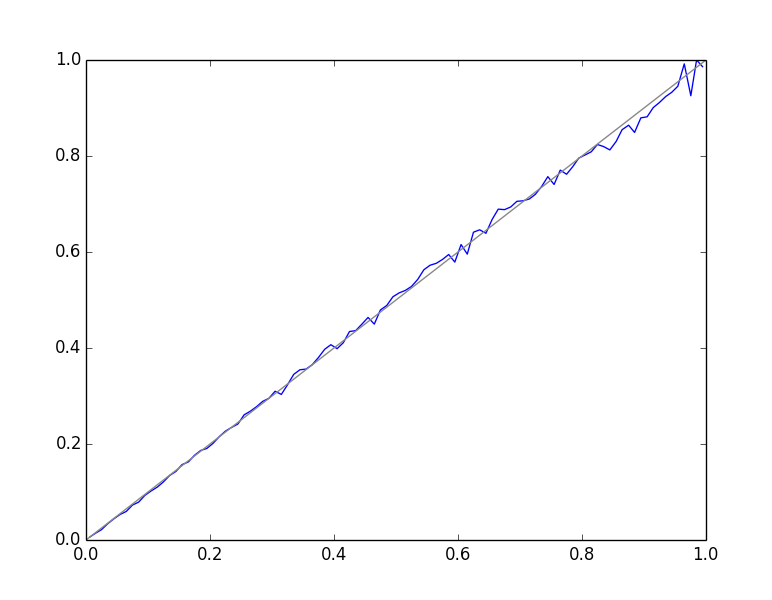 And now a classifier that could use some calibration (Vowpal Wabbit / Avito competition): 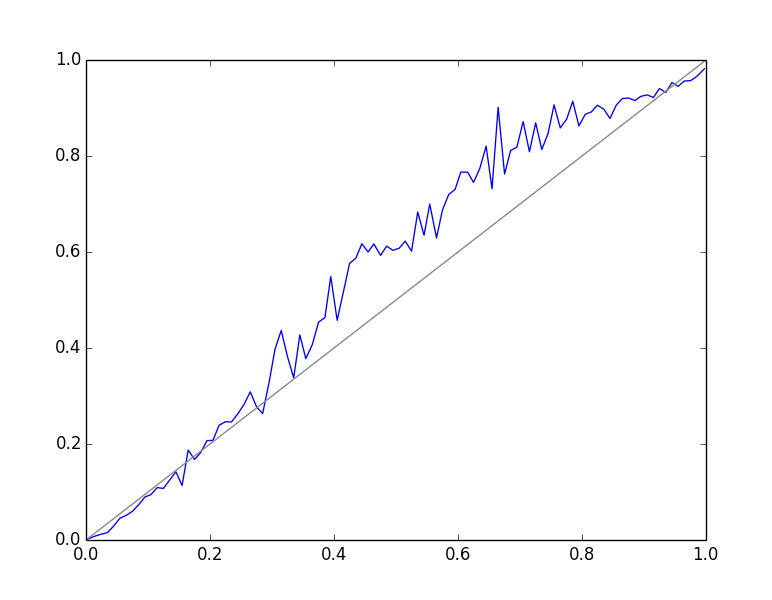 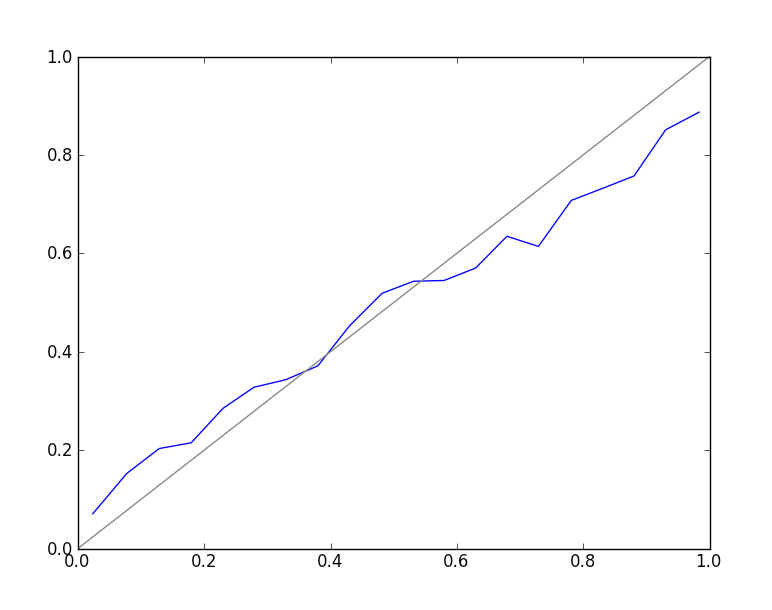 It doesn’t look sigmoidal like the plots in the paper; more like sigmoid mirrored around the central line.

The code might look like the snippet below. X is a vector of classifier outputs and y are true labels.

And now the Adult random forest calibrated with Platt’s scaling. The blue line shows “before” and the green line “after”. The plot looks smoother because we used fewer bins than in the diagram above. 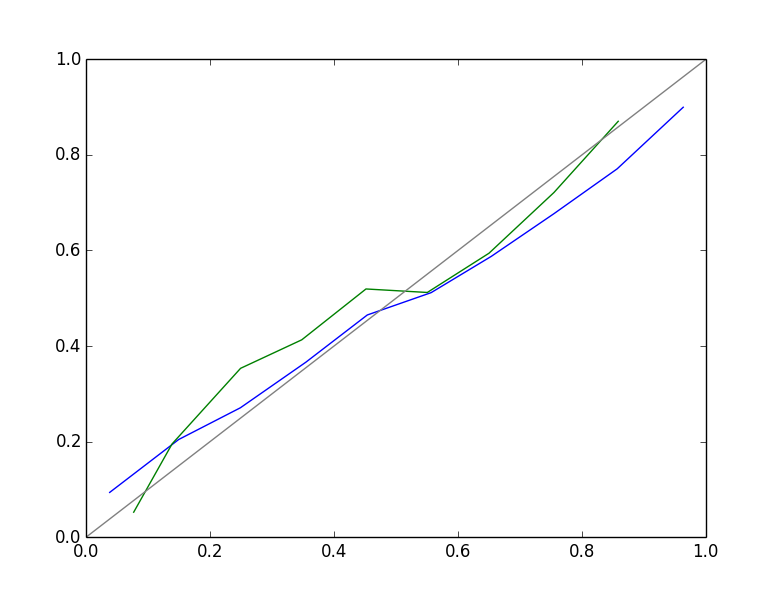 Blue: before, green: after.

The numbers look good: AUC is unchanged and log loss reduction is dramatic. 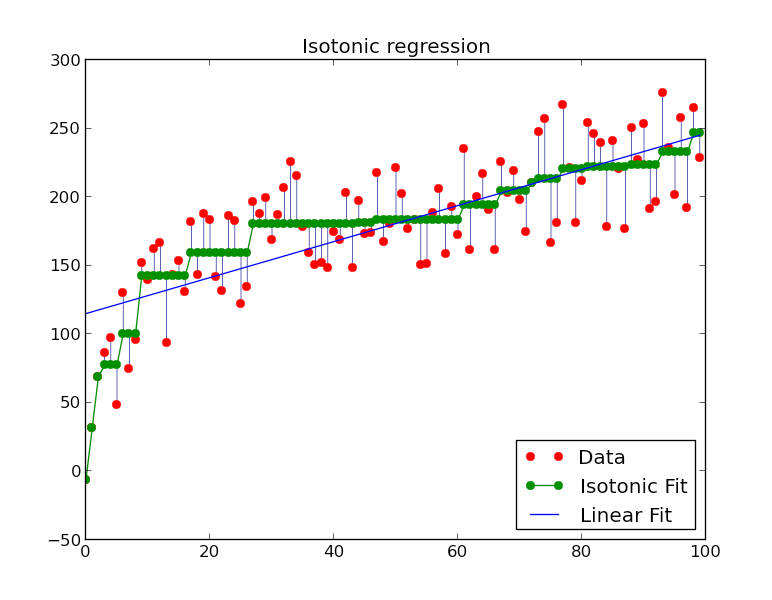 The stairs. Notice that this plot doesn’t deal with calibration. Credit: scikit-learn

The scikit-learn docs look a bit confusing to us, but apparently it’s just as simple as with logistic regression. There’s some talk about the order, but one doesn’t need to sort either x or y, the algorithm will take care of this. 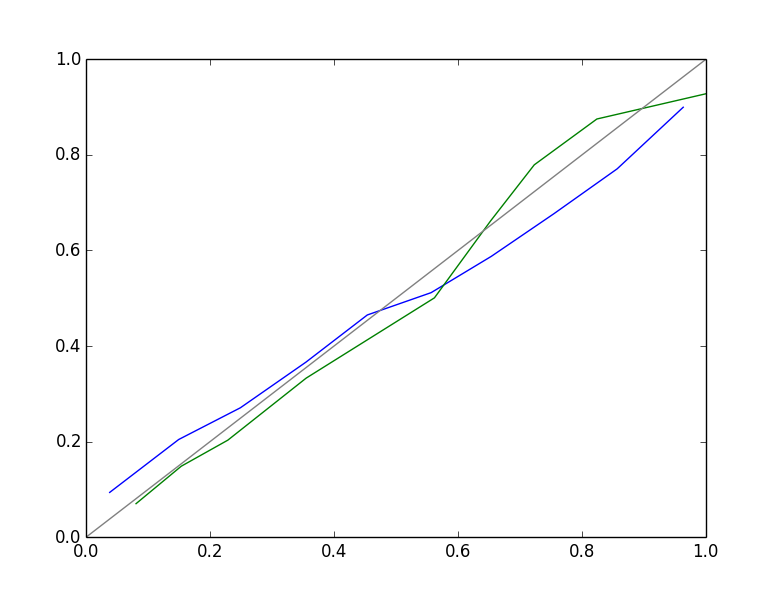 After calibration accuracy and AUC suffer a tiny bit, but log loss gets smaller, although nowhere near the result from Platt’s scaling: 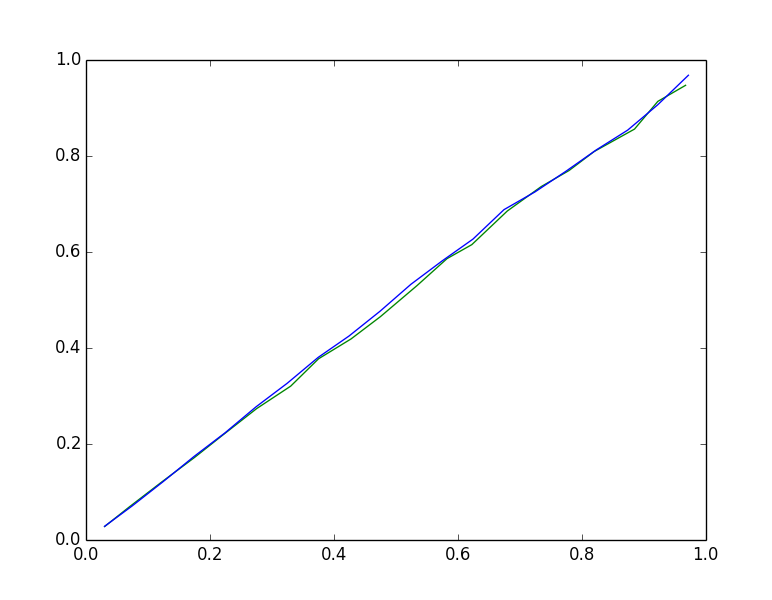 No improvement. And the second one: 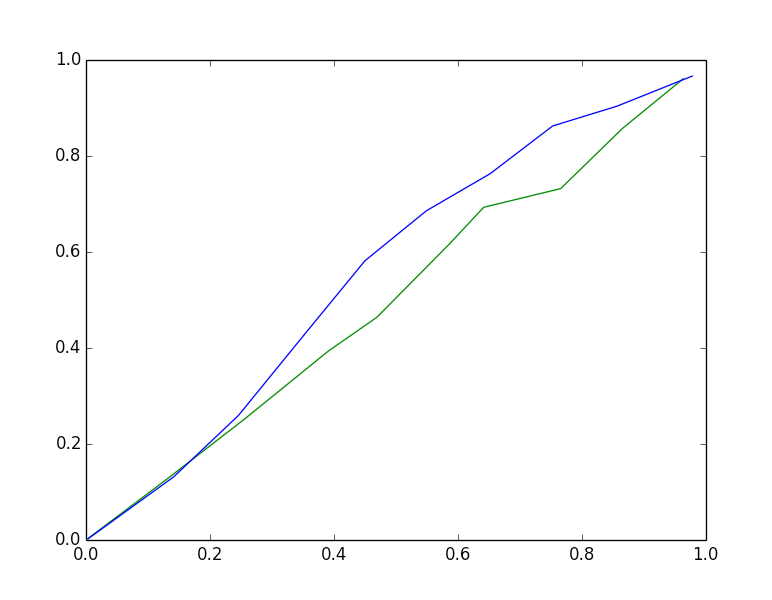 It won’t come as a surprise that the score improved - the log loss dropped by 5.4%:

There’s no point in calibrating if the classifier is already good in this respect. First make a reliability diagram and if it looks like it could be improved, then calibrate. That is, if your metric justifies it.

The code is available at GitHub. You’ll need to modify load_data.py to suit your needs.