Pedro Domingos’ new book, The Master Algorithm, is a readable overview of machine learning. The author discerns and describes five main schools of thought in the field: symbolists, connectionists, evolutionaries, Bayesians and analogizers. Here’a a piece about how Bayesians fit their models, that is, infer parameter values. Even though the context is Bayes nets, the described method is applicable to almost any model. 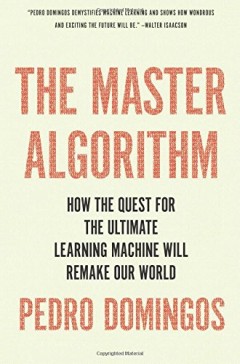 The most popular option [in Bayesian inference], however, is to drown our sorrows in alcohol, get punch drunk, and stumble around all night. The technical term for this is Markov chain Monte Carlo, or MCMC for short. The “Monte Carlo” part is because the method involves chance, like a visit to the eponymous casino, and the “Markov chain” part is because it involves taking a sequence of steps, each of which depends only on the previous one. The idea in MCMC is to do a random walk, like the proverbial drunkard, jumping from state to state of the network in such a way that, in the long run, the number of times each state is visited is proportional to its probability. We can then estimate the probability of a burglary, say, as the fraction of times we visited a state where there was a burglary.

A “well-behaved” Markov chain converges to a stable distribution, so after a while it always gives approximately the same answers. For example, when you shuffle a deck of cards, after a while all card orders are equally likely, no matter the initial order; so you know that if there are n possible orders, the probability of each one is 1/n. The trick in MCMC is to design a Markov chain that converges to the distribution of our Bayesian network. One easy option is to repeatedly cycle through the variables, sampling each one according to its conditional probability given the state of its neighbors. People often talk about MCMC as a kind of simulation, but it’s not: the Markov chain does not simulate any real process; rather, we concocted it to efficiently generate samples from a Bayesian network, which is itself not a sequential model.

The origins of MCMC go all the way back to the Manhattan Project, when physicists needed to estimate the probability that neutrons would collide with atoms and set off a chain reaction. But in more recent decades, it has sparked such a revolution that it’s often considered one of the most important algorithms of all time. MCMC is good not just for computing probabilities but for integrating any function. Without it, scientists were limited to functions they could integrate analytically, or to well-behaved, low-dimensional integrals they could approximate as a series of trapezoids. With MCMC, they’re free to build complex models, knowing the computer will do the heavy lifting. Bayesians, for one, probably have MCMC to thank for the rising popularity of their methods more than anything else.

On the downside, MCMC is often excruciatingly slow to converge, or fools you by looking like it’s converged when it hasn’t. Real probability distributions are usually very peaked, with vast wastelands of minuscule probability punctuated by sudden Everests. The Markov chain then converges to the nearest peak and stays there, leading to very biased probability estimates. It’s as if the drunkard followed the scent of alcohol to the nearest tavern and stayed there all night, instead of wandering all around the city like we wanted him to. On the other hand, if instead of using a Markov chain we just generated independent samples, like simpler Monte Carlo methods do, we’d have no scent to follow and probably wouldn’t even find that first tavern; it would be like throwing darts at a map of the city, hoping they land smack dab on the pubs.

Inference in Bayesian networks is not limited to computing probabilities. It also includes finding the most probable explanation for the evidence, such as the disease that best explains the symptoms or the words that best explain the sounds Siri heard. This is not the same as just picking the most probable word at each step, because words that are individually likely given their sounds may be unlikely to occur together, as in the “Call the please” example. However, similar kinds of algorithms also work for this task (and they are, in fact, what most speech recognizers use).

Most importantly, inference includes making the best decisions, guided not just by the probabilities of different outcomes but also by the corresponding costs (or utilities, to use the technical term). The cost of ignoring an e-mail from your boss asking you to do something by tomorrow is much greater than the cost of seeing a piece of spam, so often it’s better to let an e-mail through even if it does seem fairly likely to be spam.

You can read a longer, introductory excerpt in the Salon.